The new GCSE for Science (and Physics) requires pupils to discuss Energy in a new way. I was very dubious about this new speak energy model at first but having introduced it with 7 classes since September I can say I am mildly converted to it. I think it’s a better way describe much of what goes on in the universe than the older model for energy. Like most models we use in Physics to explain physical processes it is not perfect. But you are required to use it. So here goes my attempt at it.

Firstly, there is no such a thing as energy. I don’t use joules of energy to walk up the stairs - I apply newtons of force to fight gravity (or use the lift...). If you are pushed you don’t feel joules of energy but you will feel newtons of force applied over a certain distance. This model for energy is manmade and is a mathematical description of how forces interact with matter. That said, I will refer to joules of energy or joules as things that can be transferred and stored. HERE GOES!

The old model for energy contained 9 (or 10) types/forms of energy and that energy can be transferred from any type to any other type depending on the process being described. We gave these types equations which explained how they worked and what we had to do to increase or decrease them.

Behind this old model was the universal principle of conservation of energy which states that energy cannot be created or destroyed and that is only changes from type to type.

The new model for energy is also based on the principle of conservation of energy so that is the same. The major differences come from how we describe different types of energy. We now say that an object can have joules of energy in one of its 8 possible stores and that to transfer these joules of energy from one store to another it has to be done by one of 4 pathways.

Part of my problem with this new model was where sound and light fits into the picture. Light is now a transfer of energy rather than a measure of joules itself. Sound is where I disagree with some textbooks. Sound is listed in the radiation transfer but I think it belongs more in the mechanical transfer as sound is the mechanical movement of particles.

As with the older model you will be required to explain real-life processes using the 8 stores and 4 pathways.

I think of a joule now as being like a marble. This marble can be located in one of the 8 stores at any one time. What we would have traditionally thought of as a transfer of energy should now be visualised as the marble (joule) moving from one container (store) to another one container (store) through a newly created pipe (pathway). This pathway is generated when a force is exerted. The nice thing about this visualisation is that the containers and pipe can be any size or width as it represents real life.

A container for the kinetic energy store for a small mass might be small and it fills up with marbles (joules) as it increases speed until it reaches some maximum capacity for kinetic energy. If this object were to suddenly hit a target and stop almost instantaneously then there would be a large transfer of joules very quickly to the thermal stores of the target. The pipe (pathway) for this would be very wide as lots of joules will have been transferred in a short time. In time this target will cool down and transfer joules to the thermal stores of the environment. This pathway may be smaller to represent the slower cooling time for the target than its heating up time. The thermal stores of the environment could be considered as a massive store which doesn’t really get that warm even when lots of joules are transferred to it as these joules will be widely spread out. 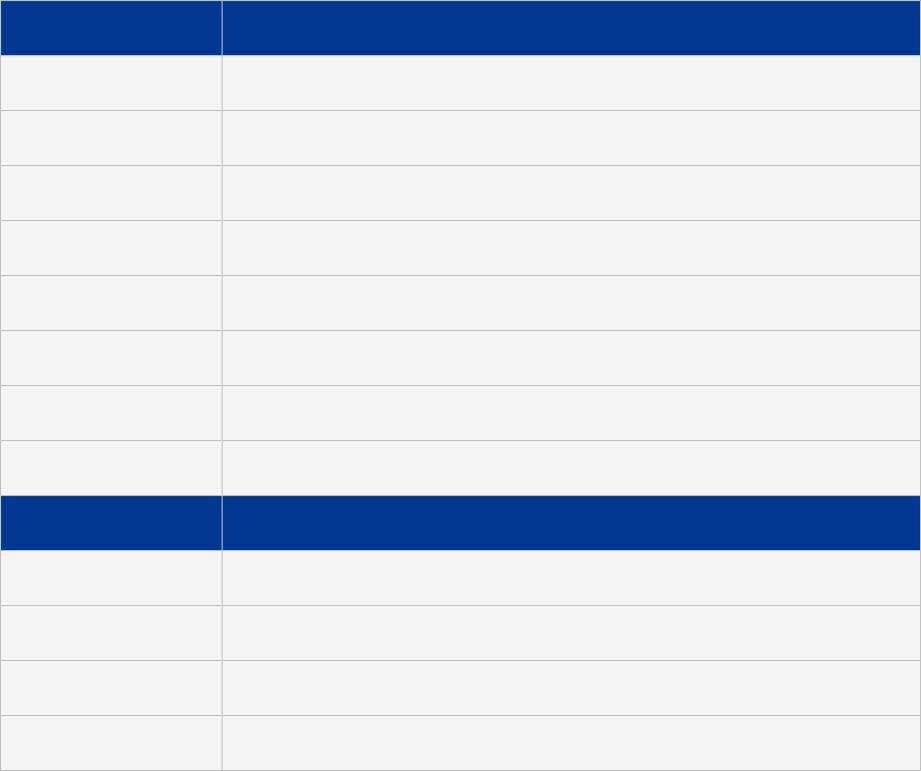 8 STORES
All of these stores can be measured in JOULES (J)
KINETIC
If an object has mass and is moving at a speed then it will have joules in this store
GRAVITATIONAL POTENTIAL
If an object has been forced against gravity then it will have joules stored in this store
ELASTIC POTENTIAL
If a force has been applied to stretch or compress a spring then it will have joules in this store
THERMAL (INTERNAL)
This is a measure of the temperature of an object which is the average kinetic energy of its particles. In many examples the thermal stores of an object or the air is where most joules will end up.
CHEMICAL POTENTIAL
This is the energy locked inside a fuel or food. A battery in a circuit will have joules in its chemical stores transferring to the circuit.
NUCLEAR
The energy locked inside the nucleus of an atom. The joules in this store can be transferred during nuclear fission, nuclear fusion and in the emission of nuclear radiation.
ELECTROSTATIC
If two opposite charges ( + and - ) are separated then joules of energy are in this store. These joules can be transferred to a moving charge between them.
MAGNETIC
If a force has been applied to pull two poles apart then the magnets will have joules in this store.
4 PATHWAYS
Transfers when something happens and measured in JOULES PER SECOND (J/s) although we use WATTS (W)
MECHANICAL
Joules of energy are transferred mechanically when work is done by a force
ELECTRICAL
Joules of energy are transferred electrically when work is done by a moving charge which is called an electric current
HEATING
If two object in direct contact are at different temperatures then joules of energy are transferred from the thermal stores of the higher temperature object to the thermal store of the cooler e.g. solid to solid, solid to gas
RADIATION
An object at a certain temperature will radiate electromagnetic energy in the infrared range of frequencies. If the temperature is higher then it will radiate electromagnetic energy in the visible range i.e. light 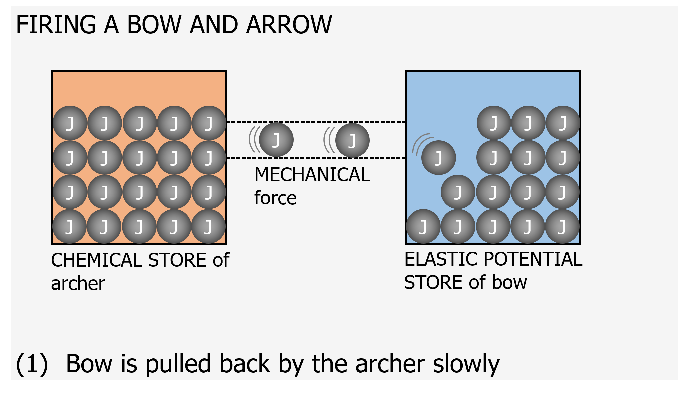 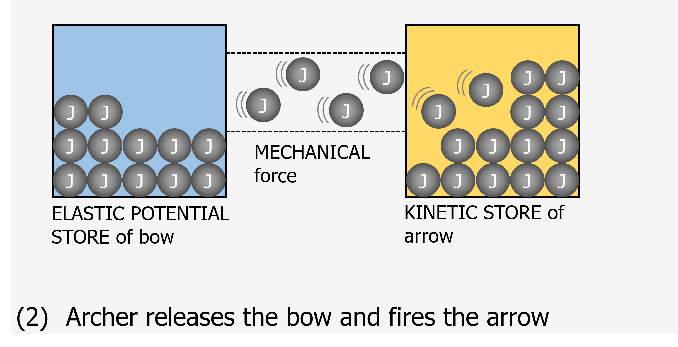 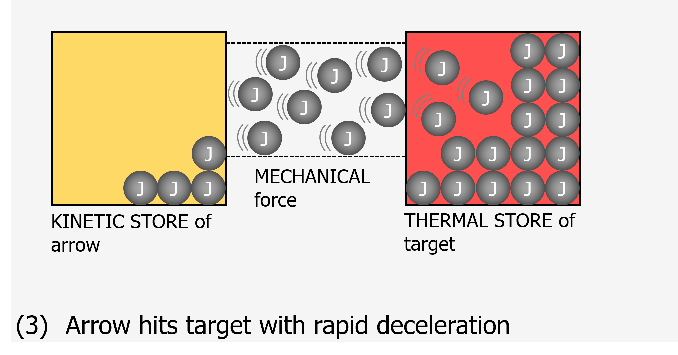